The ten-piston brake calipers on the front axle of the S are a new high point in the development of high-performance brake systems—the latest in a long tradition.

In spite of all foresight, sometimes only a spirited stomp on the brake pedal will do the trick. What happens then in a impresses drivers time and again. This brute-force, almost surreal braking experience is no coincidence, but—ever since the first series with disc brakes, the 356 B 2 in 1962— philosophy in action.

“In true sports cars, the engine and brake power belong together like yin and yang,” says Donatus Neudeck, head of brakes, hydraulics, and actuation systems at . “We determine the requisite dimensions of a brake system from a variety of parameters, including the vehicle weight, axle-load distribution, acceleration power, and the top speed. Taking into account the cooling efficiency and wheel dimensions, we can then define the optimal design for the brake disc, brake caliper, and the remaining wheel brake components.”

The goal of the developers is to provide the best braking performance and driving dynamics in the segment for every model line. That applies for the S as well: Whether it is the brake disc dimensions and material selection, the brake cooling, the tires, or control systems, at every stage of the process, the only way to achieve a harmonious, balanced, and compelling overall package in the end result is to consider every component all the time. In this way ensures that the SUV brakes like a sports car—because it is developed in the same way as a sports car.

“The final design of the brake system derives from our fading brake cycle, which is one of the most sophisticated in the whole industry,” explains Alexander Prahst, head of development for ceramic brakes. The extreme test takes place on the high-speed circular track in Nardò, Italy, and consists of twenty brakings. The testers accelerate the car from 90 to 230 km/h. Then they hit the brakes.

“After fifteen brakings, the discs reach temperatures of up to 750 degrees Celsius. To test the cooling efficiency, we let the brakes cool down to 150 degrees between the fifteenth and sixteenth brakings. With the last five brakings, we then check whether their frictional coefficient has changed or whether the brakes work with the same cool composure as at the beginning of the test,” says Prahst.

With the new 419 kW (570 hp) and up to 2,900-kilo (fully loaded) S, the envelope-pushing requirements gave rise to a new dimension in brake development. It is the first high-performance SUV with ten-piston brake calipers on the front axle.

In combination with the standard 420 x 40–millimeter ceramic discs with aluminum brake pots, the new development permits a drastic enlargement of the pad surface to 165 cubic centimeters. “In combination with the also new friction coating on the brake disc, it enables extremely uniform, consistently high friction,” explains Prahst. At the same time, it was possible to reduce the weight of the brake disc from 9.8 to just under 8.5 kilograms. “Size and weight are clearly conflicting objectives. In our high-performance variants, we therefore rely exclusively on the Ceramic Composite Brake [PCCB], which reduces the unsprung masses by up to 30 kilograms and improves driving behavior,” says Prahst.

Moreover, the engineers designed the aerodynamics and axles to allow as much cooling air as possible into the center of the brake pot. Internally vented brake discs direct the heat via unidirectional internal cooling channels with exceptional efficiency. Neudeck illustrates just how decisive this is with an example: “When braking to a stop from top speed, the friction heat generated by the S would suffice to boil two buckets of water in about 5 seconds.”

Performance, noise, and comfort present additional conflicts. “The vibration of the disc causes it to act like a speaker that reflects sounds.” In road use, customers do not accept the type of ambient noise tolerated while racing on a track. That’s why we work together with the manufacturers to develop pads that unite braking performance with noise requirements,” says Neudeck.

Aside from these differences in the details, brake development in motor racing and series vehicles has advanced in lockstep, beginning with the aforementioned first series-standard disc brakes in 1962, which originated in the 804 Formula 1 race car. In 1977, for example, the 911 (Type 930) took on virtually unmodified the brake system of the 917/30 endurance race car from 1973.

Another step towards greater brake power was marked by the axially mounted aluminum fixed caliper, which became the standard of the 964 (from 1988) and 993 (from 1993) generations of the 911. The use of 17-inch wheels in the 964 enabled a major upsizing of the brake system. The technology was once again driven by the racing department.

The different brakes can be recognized by the colors of the brake calipers. The standard versions are black; the S brake calipers are either silver or red, depending on the model; and the PCCB brakes are yellow. As for the size, disc sizes over 420 millimeters are too large for a 20-inch wheel, and that’s the threshold for the S as well—due to the chain clearance on 20-inch winter wheels. So where is development heading now?

“ will not budge one millimeter from its demanding brake strategy in the future,” promises Neudeck. “The trend towards lighter vehicles plays into our hands, and hybridization is also taking pressure off the brakes to a greater degree than some had expected. In races with the 911 GT3 R Hybrid, we’ve noticed that pad and disc wear are reduced by up to 50 percent.” But new challenges are waiting.

After 2021, the use of copper in brake pads will be prohibited in the United States. At present, the copper content in brake pads is up to 35 percent—thanks to its high heat absorption and homogeneous dispersion, the material has played a major role in high-performance brake pads to date. “We essentially had to start from scratch on that point,” says Neudeck. “We’ve now found some very interesting alternatives, however, and will likely fulfill the new standards well ahead of time.” The next brake highlight from is in the works.

The world is a disc

From the 356 to the : Milestones in brake development 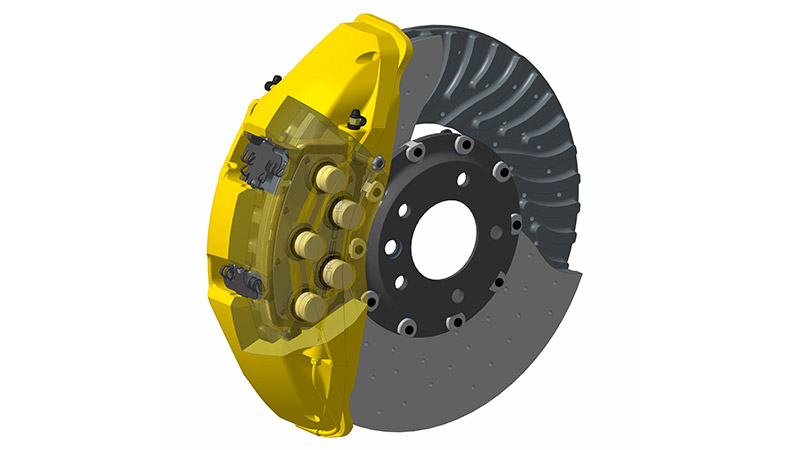 Ten-piston brake calipers are being used for the first time on the front axle of the S. In conjunction with the ceramic brake discs with a diameter of 420 millimeters (also standard), they ensure the highest fading stability and exceptional responsiveness even at high speeds. 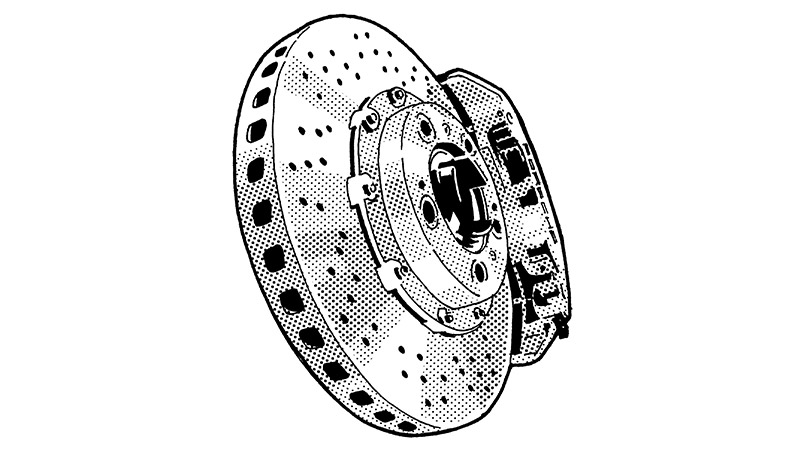 The PCCB ( Ceramic Composite Brake) celebrates its debut in the 911 and 911 GT2. The ceramic brakes are 50 percent lighter than gray cast-iron discs with comparable braking power. This advance reduces the unsprung mass—and enhances driving comfort and brake performance. 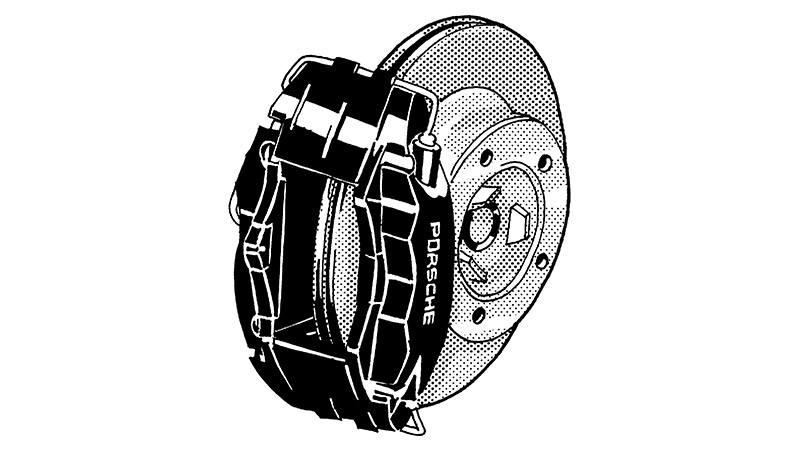 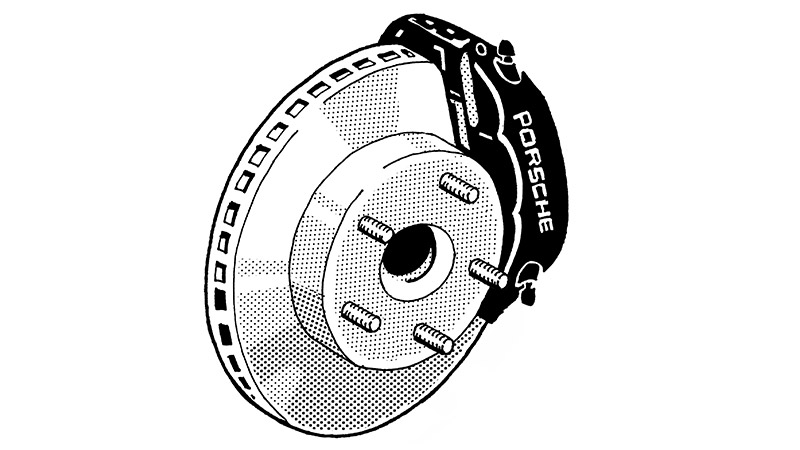 Anti-lock brakes (ABS) first appear as an option for the 928 S. The system prevents the wheels from locking during full braking—the car retains its steerability. 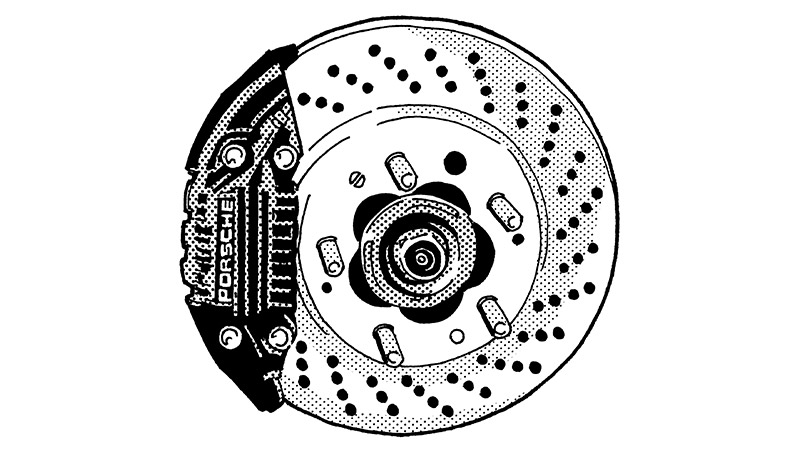 Four-piston brake calipers ensure that the brake performance in the 911 3.3 keeps pace with the increased engine power. The technology comes from the 917/30 race car. 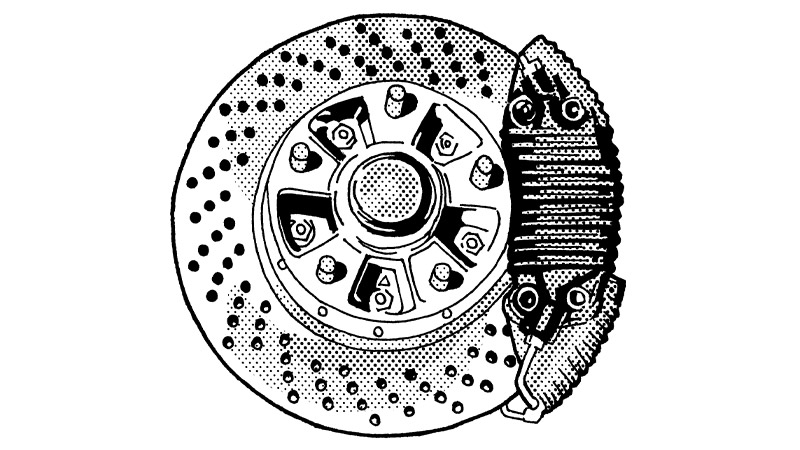 Cross-drilled brake discs are a part of the specific equipment of the 911 3.0. The holes ensure that brake pad grit and water are dispersed, which improves responsiveness particularly in wet weather. 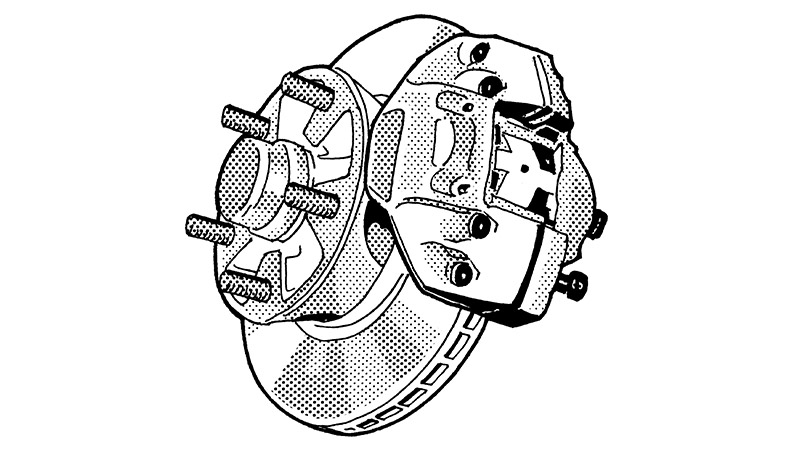 Internally vented brake discs make their premiere as standard equipment in the 911 S—front and rear. The cooling openings between the friction surfaces dissipate the heat generated while braking. 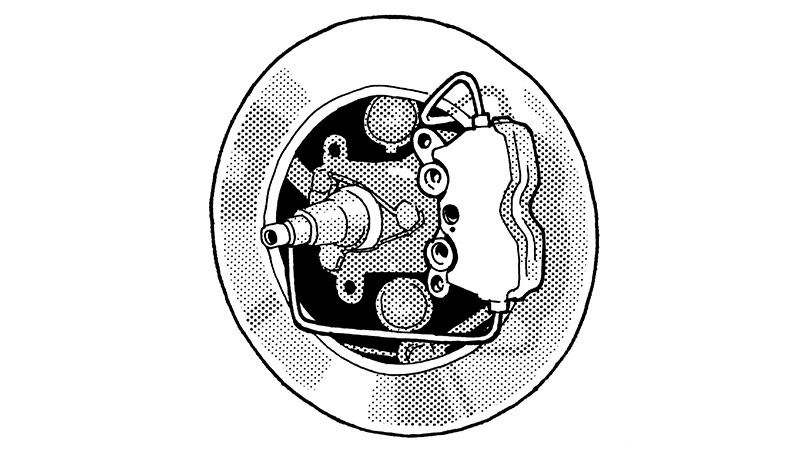 Annular disc brakes are used in the 356 B 2. The brake calipers grip the discs from the inside, allowing larger disc diameters.