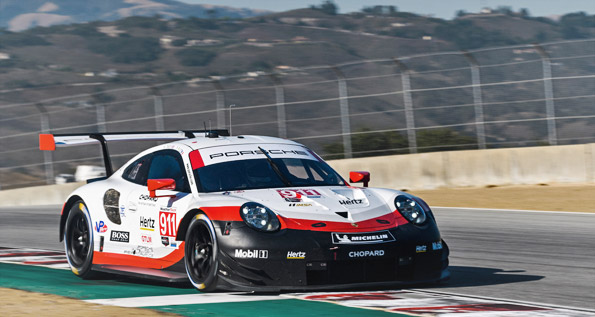 Stuttgart. The GT Team has secured a strong starting position in the qualifying session for the penultimate round of the IMSA WeatherTech SportsCar Championship. In the hunt for top times at Laguna Seca (USA), Laurens Vanthoor clocked the fourth fastest time at the wheel of the No. 912 911 RSR. The Belgian currently leads the drivers’ classification with his works driver teammate Earl Bamber (New Zealand). Nick Tandy was plagued by bad luck in the qualifying. The British racer spun in the famous Corkscrew corner, which prevented him from achieving a better result than eighth place.

Tandy, who won last year’s race at the Virginia International Raceway with Patrick Pilet (France), wanted to attack in his second lap. While turning into the right-hander at the crest of the Corkscrew, he lost the rear of the No. 911 ca. 510 hp 911 RSR. Tandy avoided hitting the barriers, but after the spin, the tyres no longer offered sufficient grip to post fast lap times. Vanthoor gradually got his tyres up to temperature and made his best attempt only in the sixth lap. Putting in a flawless drive in the 911 RSR, which is based on the high-performance 911 GT3 RS*, the Belgian claimed the fourth grid spot.

The GTD class qualifying was red-flagged after an accident involving Patrick Lindsey in the No. 73 911 GT3 R. The American, who shares the vehicle fielded by Park Place Motorsports with works driver Patrick Long, was uninjured in the accident. Due to the severity of the damage, the team will not be able to contest the race. Zacharie Robichon (Canada) posted the third quickest lap time in the identical ca. 500 hp GT3 vehicle. Pilet, as the current leader of the IMSA Sprint Cup, shares the cockpit of the No. 9 car run by Pfaff Motorsports with his compatriot Scott Hargrove.

Pascal Zurlinden (Director Factory Motorsport): “At first glance, the result doesn’t look particularly good, but we’re actually okay with it. Our number 912 got the most out of it. The championship-leading car will head into the race in front of the Corvette and Ford, and that’s enormously important on a racetrack where overtaking is very difficult. We’ll go all-out right from the start because we should be strong over the distance.”

Steffen Höllwarth (Head of Operations IMSA Championship): “It’s not the best result, but it’s one we can easily live with. Laurens managed to position himself ahead of his toughest rivals in the championship. Unfortunately, Nick was unlucky in the sister car. Everyone is driving at the limit, and at some point all the cars veered off the track. Nick’s vehicle spun unfortunately. As a result, it wasn’t possible to do better. Still, anything can happen in the race. The durability of the tyres will be the deciding factor. By now, we’ve always managed this discipline well.”

Nick Tandy ( 911 RSR #911): “I attacked in my second flying lap and unfortunately I went too far over the kerbs at the Corkscrew exit. I couldn’t prevent the spin. Afterwards I did my very best in renewed attempt but the tyres couldn’t manage another fast lap. Our grid position is obviously anything but ideal.”

Laurens Vanthoor ( 911 RSR #912): “We never had the best speed during the individual laps of the session. Our strength, however, is our consistency in the race. With this in mind, fourth place in qualifying is a pretty decent result. We line up on the grid in front of our main rivals in the championship, so we should be pretty pleased about that.”

All reports on the previous season can be found in our archive.